Trismus has many names, such as “lock jaw”, Temporal-Mandibular Joint (TMJ), Temporal-Mandibular Joint Disorder (TMJD), limited mouth opening, and jaw hypomobility. Trismus comes from the Greek word “trismos”, which means a restriction of the jaw due to damage or fibrosis of the TMJ musculature. An inadequate opening of the jaw is classified as anything under 35-40 mm or the ability to fit less than the width of 3 fingers within the oral cavity.

Trismus can cause difficulty with mastication, speech intelligibility, and quality of life secondary to reduced range of motion of the joint. Currently there is no consensus on how to treat trismus and research is sparse; however, there is some evidence that jaw mobilization devices, such as Thera Bite® or the Dynasplint® systems are useful and effective in the treatment of trismus. 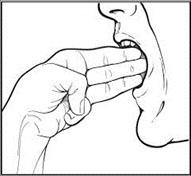 It is very important that before evaluating or treating trismus, the origin of the individual’s trismus is known. Trismus can be caused by infection (i.e., oral cavity abscesses), CNS disorders (i.e., tetanus), trauma (e.g., fractures, deep lacerations), poor oral habits, surgery, psychogenic or pharmacology components, and/or radiation induced. In some cases, therapy is provided to prevent trismus, specifically for individuals with head and neck cancer. The length of the treatment course varies depending on the individual’s motivation and the etiology of the trismus. Treatment can last for several weeks (~4-8) or the patient may have to work on maximizing their jaw opening for the remainder of their lifetime.

Speech-Language Pathologists can help reduce many of the effects related to trismus, such as: poor oral hygiene, increased pain, reduced mastication, difficulty swallowing, reduced speech intelligibility and quality of life. The Speech-Language Pathologist’s role is to: 1) Identify patients who have mild, moderate, and severe trismus. 2) Evaluate patients with trismus using effective assessment tools. 3) Design progressive, therapeutic trismus programs. If you have a patient with suspected issues related to Trismus, make sure to contract the therapy team at Southwest Rehabilitation!